Euler, the Beethoven of Mathematics - OpenMind

Euler, the Beethoven of Mathematics - OpenMind


Sign in or register to rate this publication
In the educational studies of every scientist, there are a
few individual names that seem to emerge from course to course. But
above those of Newton, Galileo, or Einstein, there is
one name that probably surpasses them all as the first to appear—once
children master the four basic arithmetic operations, their approach to
logic begins with set theory and its Venn diagrams. But these are but
one particular case of those invented by a mathematician whose name
designates constants, functions, equations, laws, theorems, and almost
any other type of mathematical entity: Euler.


The Swiss Leonhard Euler (15 April 1707 – 18
September 1783) was one of the greatest intellectual supermen in the
history of mankind. The numbers serve to demonstrate his incredible
mental superpowers—over his 76 years of life he published more than 800
works, totalling some 30,000 pages. It has been estimated that almost a third of all the science and mathematics written in the eighteenth century bears his signature. After his death, his obituary required 56 pages to list all his publications.


But even the numbers fall short in describing a prodigious mind whose
talent manifested itself in some anecdotes. Perhaps the best known is
that he was able to recite Virgil’s Aeneid from beginning to end, detailing in what line every page of the edition he owned began and ended.

Memory was not the only ability in which his brain seemed to
anticipate our current machines—his computing power was also superhuman.
He spent the last 17 years of his life almost totally blind,
due to a cataract in his left eye and a degenerative lesion in the
right one, whose origin varies according to the versions. But if this
disease affected his output, it was only to increase it; “in this way I
will have fewer distractions,” he once said. At one stage he was writing
an average of one work a week and joked about his enormous production,
claiming that his pencil outperformed him in intelligence. Like a
Beethoven unable to hear his music, Euler could hardly see his calculations,
but in his head he counted tables of lunar movements with such clarity
that an apprentice tailor could serve as a secretary without the need
for mathematical training. 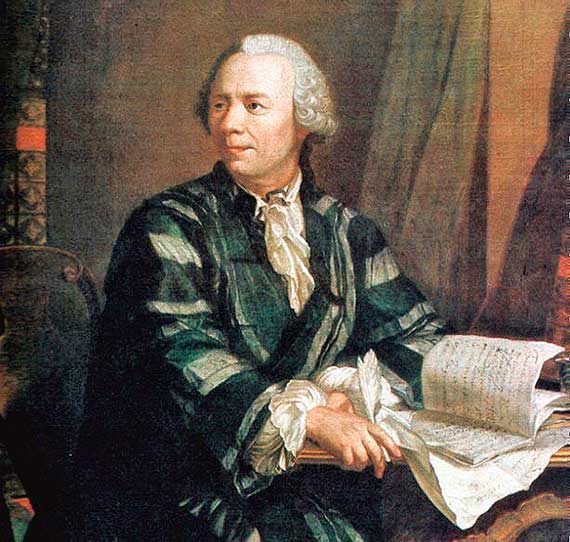 Leonhard Euler portrayed by Jakob Emanuel Handmann circa 1756. Source: Deutsches Museum, Munich
On one occasion, two students disagreed over the result of the sum of
17 terms in a series, as the results of the two operations differed in
the fiftieth decimal place. Without a pencil or slate, Euler computed
the correct result in his mind in a few seconds. The anecdote was
referred to by his contemporary and colleague, the Frenchman Nicolas de
Condorcet, who at Euler’s death wrote a lengthy eulogy to “one of the
greatest and most extraordinary men that Nature ever produced.”


Curiously, that genius might have been lost to mathematics if Euler
had followed in the footsteps of his father to serve as pastor of the
Reformed Church, as planned. The advice of the mathematician Johann
Bernoulli, a friend of the family, was key in directing Euler’s
footsteps definitively towards mathematics and science.


Precocious in his studies and in his career, he soon began to stand out, which led him to travel to occupy prestigious positions in the Academies of Saint Petersburg and Berlin.
The most prolific mathematician in history was not only the main
founder of what we now know as classical mathematics, exploring a wide
variety of fields and introducing much of the notation used today, but
he also explored other disciplines such as astronomy, optics,
engineering, magnetism, ballistics, navigation, shipbuilding, philosophy
and music. It is said that his musical theory did not triumph because
it was too advanced in mathematical computations for musicians, and too
musical for mathematicians.


A Gift for Dissemination

Euler was also endowed with a gift for dissemination, without having
dedicated himself professionally to teaching. Proof of this is the
publication that was a best seller in its time—Letters to a German Princess, On Different Subjects in Physics and of Philosophy,
a work in three volumes that began to be published in 1768 and that
collects the letters written by Euler to his pupil, Friederike Charlotte
of Brandenburg-Schwedt, princess of Anhalt-Dessau and niece of the King
of Prussia Federico the Great. 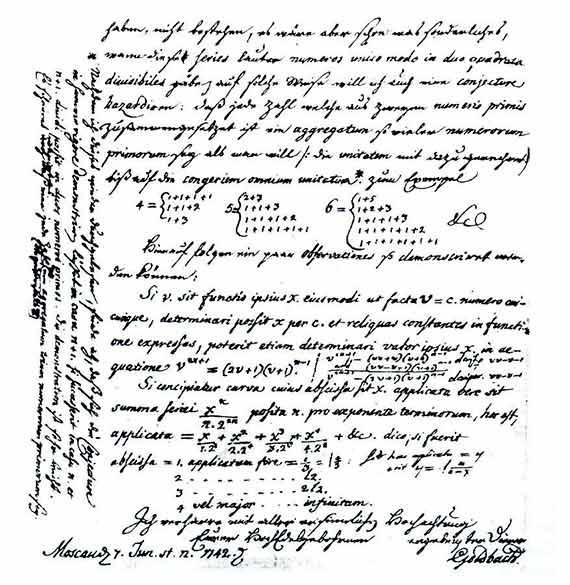 The famous Goldbach Conjecture first appeared in a letter addressed to Euler by Christian Goldbach. Source: Departament of Mathematics and Statistics – Dalhousie University
In fact, Euler’s correspondence is also a treasure trove—the famous
Goldbach Conjecture, one of the oldest yet unsolved mathematical
problems, first appeared in 1742 in a letter addressed to Euler by the
German mathematician Christian Goldbach, his friend since they met each
other at the St. Petersburg Academy.


It was in this Russian city that, on September 18, 1783, Euler was
calculating the ascent of hot air balloons—which at that time were
causing a furore in Europe—and argued over dinner with his colleague
Anders Johan Lexell about the orbit of the newly discovered planet
Uranus. As Condorcet wrote, it was later, while drinking tea and playing
with his grandson, when “all of a sudden the pipe that he was smoking
slipped from his hand and he ceased to calculate and live.”